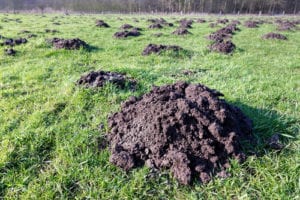 If you notice dirt mounds or surface tunnels in your yard, these could be telltale signs of a mole problem. Moles create these pathways between their dens and feeding areas and can cause serious pest problems for homeowners.

Here is a discussion of the types of damage that moles can do to your home and property and best practices for mole control Bergen County.

Most of the damage that moles do is to your yard. They burrow in lawns and gardens, creating unsightly and potentially dangerous molehills and tunnels. Although moles are mostly carnivorous, they can also harm plants and flowers in your yard. To find worms and grubs, they scrape dirt away from plants’ roots, which take nourishment away from plants and can cause them to die.

Moles typically stay in the yard and don’t find their way into the home, but it’s certainly not impossible. If your house has a poor foundation, you may encounter a mole in your home. Although direct contact with humans is rare, moles are known to carry rabies. Your pets may also be at risk if moles are in your yard if they try to catch one or are caught off-guard while digging. Moles will usually try to get away from humans, but if one doesn’t it may be sick so don’t touch it.

What Attracts Moles to Your Home

If you have a shallow foundation on your house, this could draw moles from the yard into the house. You’ll likely hear scratching under the floor from moles that are working their way through tunnels. Moles eat a significant percentage of their body weight in insects every day, so your yard may be more attractive to moles if you have lots of insects. Moles particularly like worms, beetle larvae, and grubs.

How to Rid Your Home of Moles

Since moles are active all throughout the year, the best time to get rid of them as soon as you notice a problem. Since moles carry disease and rarely surface above ground during the day, it’s important to not try to catch them yourself. An experienced exterminator is trained in trapping moles, which often works better than poisoning them or using chemical repellants. Other remedies for a mole problem in your yard include castor oil-based repellents, live traps or kill traps, baiting moles with worms, and battery-powered devices that send vibrations through the ground.

As a preventative measure, consider planting chocolate lilies or garlic in your yard, as these are natural repellents for moles. You can also replace some of the grassy areas with shrubs and native plants to reduce the amount of yard that moles could potentially take over. And finally, you can protect raised landscaping beds in your yard with metal hardware cloth or sheet metal that’s buried about two feet deep.

For your pest control and animal control needs call Precise Pest Control at 866-971-2847 or contact us online!